Radio waves are the lowest-energy, lowest-frequency and longest-wavelength electromagnetic waves. They are produced when an alternating current flows in an aerial and they spread out and travel through the atmosphere. They are not strongly absorbed by the atmosphere. Another aerial is used as a detector and the waves produce an alternating current in it, with a frequency that matches that of the radio waves. Anyone with a receiver can tune it to this frequency to pick up the radio waves so they are suitable for broadcasting (for example, radio and TV programmes) to large numbers of people. An advantage is that this method of communicating does not require wires to transmit information. A disadvantage is that radio stations using similar transmission frequencies sometimes interfere.

This video looks at Radio Waves and Microwaves in more detail.

A common mistake is to think that we can hear radio waves. We cannot hear any electromagnetic radiation. The radiation is used to carry a signal that is converted into a sound wave by the receiver.

Medium wavelength radio waves are reflected from the ionosphere, a layer of charged particles in the upper atmosphere, so they can be used for long distance communication.

Digital radio has better-quality reception as it uses digital signals and so does not have problems of noise and interference.

Some important properties of microwaves are:

Conduction and convection processes then spread the heat through the food.

As our bodies contain water molecules in our cells, microwave oven radiation will heat up our cells and is very dangerous at high intensity because it will burn body tissue. The radiation is kept inside the oven by the reflecting metal case and metal grid in the door. 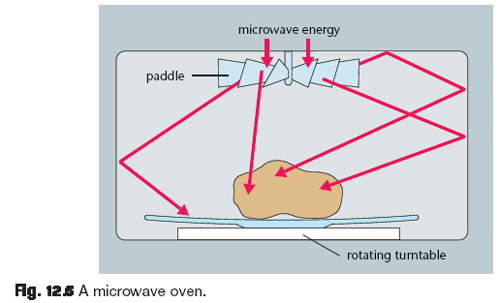 Microwaves sent through the atmosphere will be absorbed by water so they can be used to monitor rain. The weaker the signal reaching the detector, the more rain the microwaves have passed through.

Microwaves can be used to transmit signals over large distances if there are no obstacles between to reflect or absorb the beam. Another way to say this is that the transmitter and receiver are in line of sight (one can be seen from the other). This is why the transmitters are positioned high up, often on tall microwave masts. They cannot be spaced so far apart that, for example, hills or the curvature of the Earth stop the beam.

When microwaves are transmitted from a dish the wavelength must be small compared to the dish diameter to reduce diffraction – the spreading out of the beam. The dish is made of metal because metal reflects microwaves well.

Mobile phones have not been in widespread use for many years, so there is not much data about the possible dangers of using them. The transmitter is held close to the user’s head so the microwaves must have a small heating effect on the brain. There are questions about whether this could be dangerous, or whether it is not large enough to be a problem. So far studies have not found that users have suffered any serious ill effects. There may also be a risk to residents living close to mobile phone masts.

Low-intensity microwave radiation, from mobile phone masts and handsets, may be a health risk, but there is disagreement about this.