First Ionisation Energy is defined as:

The energy required to remove one electron from each of one mole of gaseous atoms to an infinite separation.

Going down a group in the periodic table: 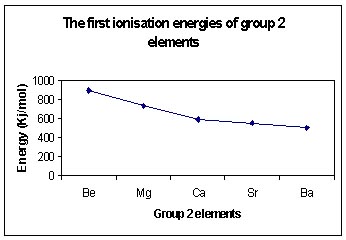 There are more filled energy levels between the nucleus and the outermost electrons.

These filled energy levels shield the outer electrons from the attractive force of the positive nucleus.

These factors mean that less energy is needed to remove the first electron from an atom at the bottom of the group compared to one at the top of the group.

Going across a period of elements:

As we go across the period, there are more protons in each nucleus so the nuclear charge in each element increases. This increases the attractive force acting on the outermost electrons.

This would explain a steady increase from left to right. The dips between groups II and III and between V and VI require more explanation.

The dip between Group II and III

The electron to be removed from the group III element has to come from a p-orbital. This is higher in energy than the s-orbital of the same main energy level. So removal of this electron is easier and so the ionisation is less.

The dip between Group V and VI

The electron to be removed from the group VI element comes from a p-orbital that has two electrons. These are repelled slightly more than the electrons in a p-orbital with only one electron. This is because the two electrons are occupying the same region of space. The extra repulsion makes the first ionisation energy a little less.

This video looks at Ionisation Energy