In Alpha Decay the nucleus is split into 2 parts with one of these parts – the alpha particle – zooming off into space.

The nucleus has its atomic number reduced by 2 and its mass number is reduced by 4 (2 protons and 2 neutrons are removed).

In Beta Decay (minus) a neutron turns into a proton. It emits an electron and an antineutrino.

The atomic number goes up by one and the mass number stays the same.

ν (or the Greek letter 'nu') is the symbol for a neutrino. The line above it shows it is an 'anti' particle – in this case an antineutrino.

There is also a Beta Decay (plus) in which a proton turns into a neutron. It emits a positron and a neutrino. The atomic number goes down by one and the mass number stays the same. 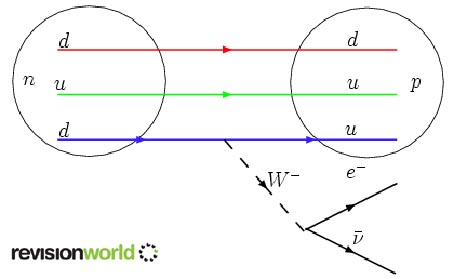 This interaction causes a quark in the neutron to change from down, d, to up, u, in the proton and emits a W- particle which then decays into an electron and antineutrino.