Constituents of the Atom

Atoms are composed of 3 fundamental, or sub-atomic, particles called protons, neutrons and electrons.

The protons and neutrons form a nucleus with electrons orbiting in shells.

Charge is in Coulomb and Mass in Kilogram.

For most elements, a sample contains a mixture of different versions.

These have the same number of protons, and electrons, but a different number of neutrons. 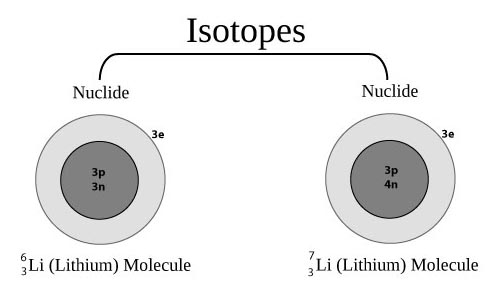 Nuclide - This is a particular version of an atom characterized by the specific constitution of its nucleus, i.e., by its number of protons Z, its number of neutrons N, and its nuclear energy state. The previous example shows a simple model of the two naturally occurring nuclides of Lithium, along with the symbols used.

Nucleon Number A - This number is made up of the total number of protons and neutrons in the nucleus, also called nucleons. Once called the mass number.

Proton Number Z - This is the number of protons in the nucleus, and also the number of electrons in a neutral atom. Once called the atomic number.

Isotopes - These are atoms with the same proton number, but different nucleon numbers. They have the same electron arrangement and, therefore, the same chemical properties

To work out the Specific Charge of Nucleus or Ion divide the charge by its mass.

The unit is Coulomb per Kilogram, cKg-1.