The interaction between particles that results in attractive and repulsive forces is due to continual exchange of exchange particles. They have a short existence on borrowed energy, and are often referred to as virtual particles.

The diagram below is a Feynman Diagram of two electrons interacting. The straight lines show the paths of the electrons, and the squiggly line shows the virtual photons that move between them.

This is an example of the electromagnetic force interactions. 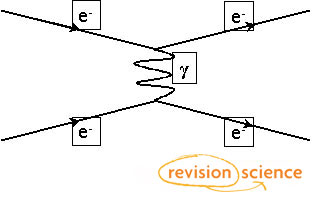 There is a similar interaction for the other forces.

For Gravitational Forces, the exchange particles are called gravitons but these haven’t been observed yet.

The Strong Force is what holds quarks together in a nucleon, and their exchange particles are called gluons.

For Weak Force interactions, there is an exchange of one of three kinds of particles called intermediate vector bosons. The symbols for these are W+, W -, Z0.