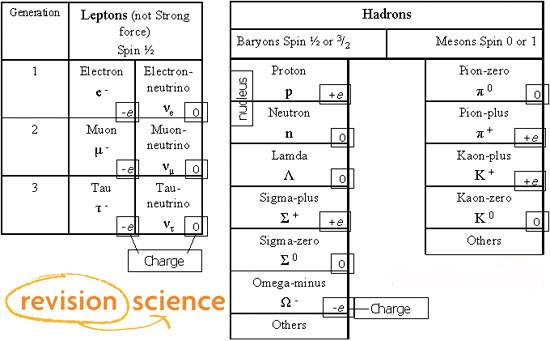 1) electron and it's antiparticle the positron, along with neutrinos given off in Beta Decay. These neutrinos are called the electron-neutrino and electron-antineutrino to distinguish them from neutrinos associated with other Leptons.

2) muons, along with their associated neutrinos. Muons have 200 times the mass of electrons but are unstable. They are produced by cosmic rays and decay into an electron and a neutrino.

3) tauons are the most massive leptons, having a mass twice that of protons. They also have there own associated neutrons They are produced by the interaction of high-energy electrons and positrons and are unstable.

Hadrons are not fundamental particles, they are made up of quarks.

Baryons are made up of 3 quarks. They include protons and neutrons.

Mesons are made up of a quark and antiquark. 2 families of Mesons are pi-mesons (or pions) and kaons.