In the photoelectric effect, electrons are emitted from a metal’s surface when it absorbs electromagnetic radiation.

The diagram below shows this. 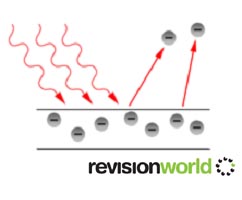 There are no electrons emitted below a certain frequency, called the threshold frequence, fo , which is different for different metals.

Above this frequency, electrons are emitted with a range of kinetic energies up to a maximum, (½mv2)max 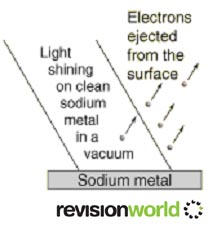 The explanation for this relies on the concept of the photon, a quantum packet of energy. So EM radiation is given by short bursts of energy.

The relationship between the energy of the photon, E, and its frequency is given by:

The energy of a photon can be measured in Joules or Electronvolts.

One electronvolt is the energy transfer when an electron moves through a potential difference of 1 volt, given by: 1 eV = 1.60x10-19 J

The minimum energy required for the electron to escape the metal is called the work function, Φ

If energy is less than Φ, then no emission occurs

Emission is possible when hf = Φ

The photoelectric equation relates the maximum kinetic energy of the emitted electrons to the work function and the energy of each photon: hf = Φ + (½mv2)

At the threshold frequency, the minimum frequency that can cause an emission is zero, so the equation becomes: hfo = Φ