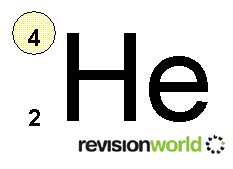 Mass Number - The total number of protons and neutrons in an atom.

Relative Atomic Mass - The average mass of the atoms in a sample compared to the mass of a carbon-12 atom which is given the relative atomic mass of 12.000.

Some periodic tables show the mass number of the most common isotope. Some show the relative atomic mass. Although it is wrong to say that they are the same thing (because they are not!) the difference will not be exploited at GCSE.

Relative Molecular Mass - This is the sum of all the relative atomic masses of all of the atoms in a compound e.g.

By using the relative molecular masses in grams we can deduce what masses of reactants to use and what mass of products will be formed.

This video explains more about the Conservation of Mass

One mole of atoms or molecule of any substance will have a mass in grams equal to the relative atomic mass or relative molecular mass for that substance.

The atomic mass of carbon is 12, therefore one mole of carbon weighs 12g

Remember the mole is just a number!

Titrations This is also known as volumetric analysis.

We try to find the volumes of acid and alkali that just cancel each other out. At first glance it might seem that 25ml of acid will always cancel 25ml of alkali but this is not the case.

Suppose that the alkali is not the same concentration as the acid. A few drops of a very concentrated alkali may neutralise a bucketful of a dilute acid.

The following statement is always true…….

At the end point, we know that the moles of acid and alkali are the same.

These moles of alkali were contained in the 29.7cm3. Use the same idea as above: